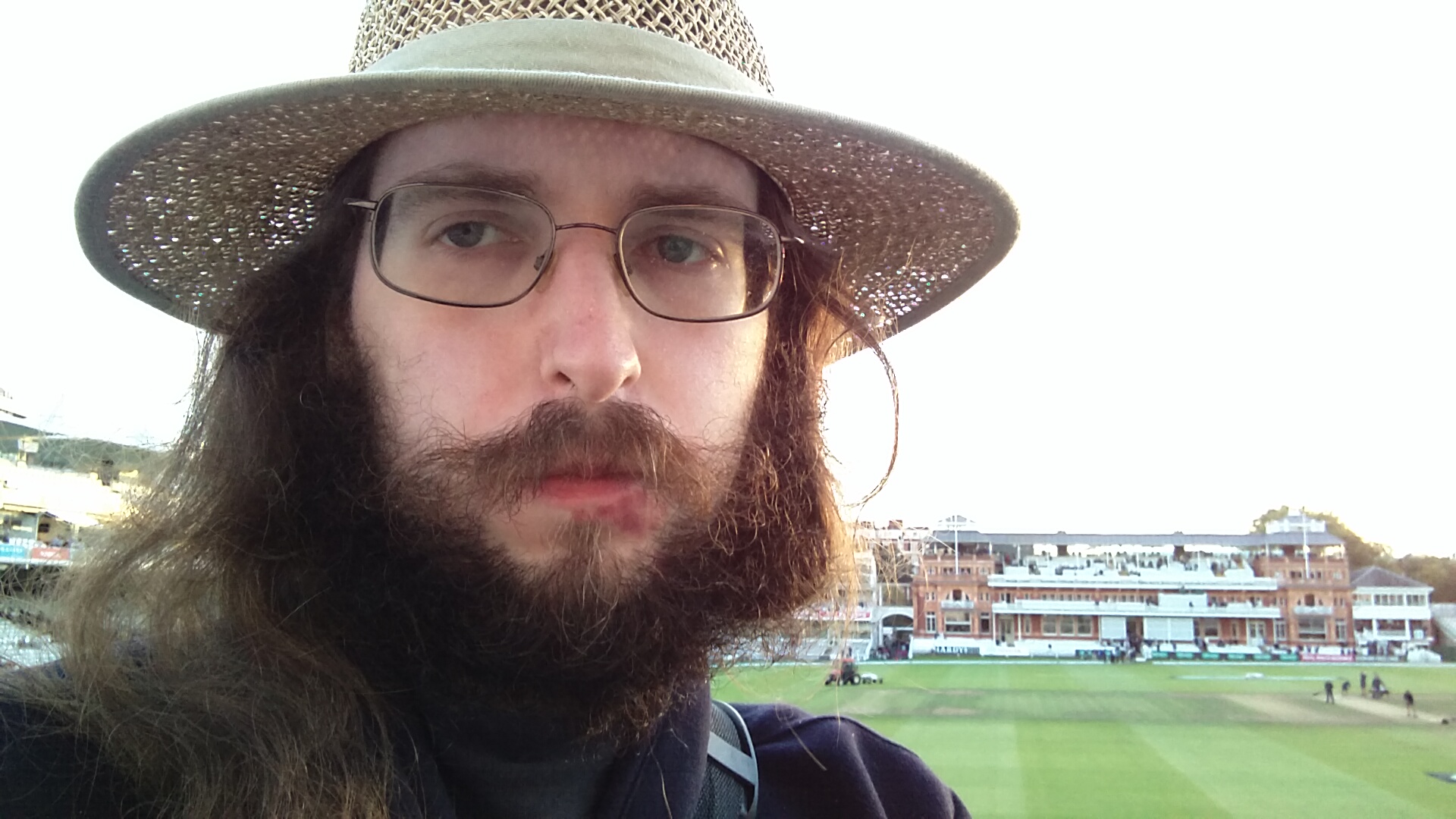 The following is mostly about one of my other passions: cricket. If you’re here for maths, the rest of my academic website should be more up your street.

I took this self-portrait (or “selfie”, in the venacular) at the end of the third day of the final County Championship match of 2016 at Lord’s Cricket Ground (the sun was low enough that I felt it best to compose the photograph myself).

Yorkshire were attempting to win the County Championship for the third year in a row. They needed to score 350 runs in the first 110 overs of their first innings to have enough points to still be able to do this.[1] Things were looking rather unlikely as I sat on the train on the way in, listening to TMS: Yorkshire were 5 down, Rafiq needing more lives than a bag of cats, Bresnan at the other end calmly showing that he really is an all-rounder, climbing into the 80s and 90s. The underground journey from Finsbury Park to St John's Wood only served to increase the tension. Eventually emerging, by some miracle they were both still there, Rafiq approaching 50, and Bresnan having made his hundred.

I made myself comfortable in the Edrich stand, below the rather vocal Yorkshire contingent. I had just pulled out my binoculars when Rafiq’s luck finally ran out, his off stump uprooted by Murtagh. Lunch loomed, and was taken at the fall of Patterson's wicket: Yorkshire 333-8.

I shifted to the Mound Stand during lunch, since the forecast was not promising. Out walked Brooks, and one tame, form-belying spoon to mid-on later, back walked Brooks and in walked Sidebottom. 94.4 overs gone, 1 wicket left, 16 still needed. The sky darkened, and the runs came, until at 349-9, the umpires decided to go off for bad light. This maddening decision was rather reinforced by a sudden shower.

I got stuck into another chapter of The Cruel Sea, and had some idle thoughts about the Ricci tensor. It rained reasonably heavily for a few minutes, during which the ground staff went through their routine with the covers. Then it stopped raining, and they went through their drying and uncovering routine. If it had been a novel, it would have been far too implausible to suspend disbelief.

Thankfully Lord’s has excellent drainage, and play resumed an hour later. Bresnan survived a nervy over of spin, and finally Sidebottom glanced one down to the fine leg boundary for four. This really showed how many Yorkshire supporters were about: the loudest noise came from the Edrich stand, but there were probably more Yorkshire than Middlesex supporters in the ground, given the number leaping up and cheering and applauding.[2]

After this, Bresnan and Sidebottom had a whack to put on a decent lead, Bresnan pulling a six into the Grandstand, and Sidebottom playing the shot of the day, a lovely straight drive that was rather lost on me since I was sitting square of the wicket at the time. They ended up with a lead of 120 when Sidebottom was out for 32, and Bresnan walked off a game-defining 142*.

I shifted back to the Edrich stand. Middlesex’s second innings started very well, for Yorkshire: Sidebottom stormed in from the Pavilion End and taking Robson with his third ball, edged to Lees at second slip, and Brooks bowled one of his classic nibble-the-top-of-off away-swingers, that Compton failed to get in the way of. Sadly the evening session settled down after than, as Gubbins assurely ground his way to 39* in 38 overs, with ample support from Malan (38*).[3]

It turned out that the third day was the best day of the match for Yorkshire anyway: the Lord’s pitch proved as dull as the others this year (Middlesex had only drawn at Lord’s so far in the season), so eventually, to the dismay of Somerset, who would win the Championship if there was a draw in this game, Yorkshire and Middlesex colluded to set Yorkshire a fourth-innings chase, and the pitch proved just too turgid to manage it. Bresnan again top-scored with 55, but Roland-Jones took the trophy for Middlesex with a hat-trick.

On the other hand, what a fantastic way for the Championship to conclude: three teams still in contention in the final week, the result decided in the last 5 overs of the summer.